CHICAGO (AP) — In this city’s troubled history of police misconduct, Eric Caine’s case may be unrivaled: It took more than 25 years and $10 million to resolve.

For decades, he maintained he didn’t brutally kill an elderly couple. The police, he said, beat him into a false confession. Locked up at age 20, he was freed at 46, bewildered by a world he no longer recognized. Caine ultimately was declared innocent, sued the city and settled for $10 million. But victory brought little peace to his troubled mind.

“They wouldn’t give anybody that large amount of money if they didn’t believe that person was wronged,” he says. “But I also look at it as a way for them to just want me to go away. … Nobody cares if I live or die. I’m a shell of a human being.”

Caine is one of the more dramatic examples of huge police settlements that have tarnished the city in recent years. Among them: A one-time death row inmate brutally beaten by police: $6.1 million. An unarmed man fatally shot by an officer as he lay on the ground: $4.1 million. 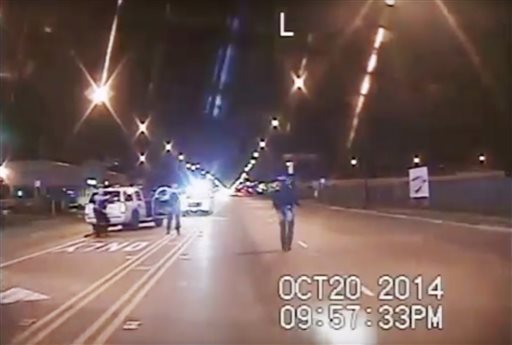 In this Oct. 20, 2014 image from video provided by the Chicago Police Department, Laquan McDonald, right, walks down the street moments before being shot by officer Jason Van Dyke in Chicago. Last year the family of McDonald, the black teenager shot 16 times by a white officer, received $5 million from the city. His death, captured in a shocking video, led to a murder charge against Van Dyke, the police chiefs firing and thunderous street protests with calls for Mayor Rahm Emanuel’s resignation. (Chicago Police Department via AP, File)

And last year, the family of Laquan McDonald, the Black teenager shot 16 times by a White officer, received $5 million. His death, captured in a shocking video, led to a murder charge against the officer, the police chief’s firing and thunderous street protests with calls for Mayor Rahm Emanuel’s resignation.

In all, Chicago has paid a staggering sum — about $662 million — on police misconduct since 2004, including judgments, settlements and outside legal fees, according to city records. The payouts, for everything from petty harassment to police torture, have brought more financial misery to a city already drowning in billions of dollars of pension debt. The U.S. Justice Department’s recent decision to investigate the Chicago police — fallout from the McDonald case — has helped focus new attention on this agonizing record of misconduct and the surprising lack of consequences. Few officers accused of wrongdoing have been disciplined in recent years.  Read more…

Roberto Blake Triples His YouTube Following and Gets Featured in Forbes